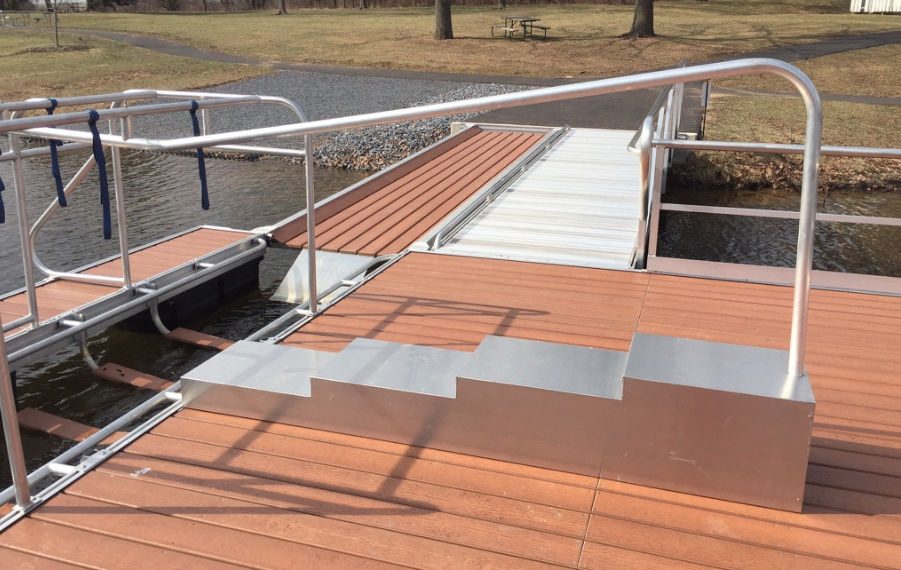 What the ADA guidelines mean for providing access to rivers, lakes, and other waterfronts via boat, kayak, canoe, and other water vessel launches, docks, gangways, marinas, and more. This information has been adapted from the United States Access Board’s guidelines for boating facilities.

“Whenever any barrier stands between you and the full rights and dignity of citizenship, we must work to remove it, in the name of simple decency and justice. The promise of the ADA … has enabled people with disabilities to enjoy much greater access to a wide range of affordable travel, recreational opportunities and life-enriching services” (President George W. Bush, New Freedom Initiative, February 1, 2001).

The Americans with Disabilities Act of 1990 (ADA) prohibits discrimination and ensures equal opportunity for persons with disabilities in employment, state and local government services, public accommodations, commercial facilities, and transportation. It also mandates the establishment of TDD/telephone relay services. The current text of the ADA includes changes made by the ADA Amendments Act of 2008 (P.L. 110-325), which became effective on January 1, 2009. The ADA was originally enacted in public law format and later rearranged and published in the United States Code.

Accessible Boating Facilities
The recreation facility guidelines described in this guide focus on newly-designed or newly-constructed and altered boating facilities. Other provisions contained in ADAAG address elements commonly found at a boating facility, such as accessible vehicle parking spaces, exterior accessible routes, and toilet and bathing facilities. ADAAG addresses only the built environment (structures and grounds). The guidelines do not address operational issues of a facility. Questions regarding operational issues should be directed to the Department of Justice, 1-800-514-0301 or 1-800-514-0383 (TTY).

Recreational boating facilities can include fixed and floating facilities. Facilities can vary in size from one boat slip (for example, at a small campground facility) to several thousand slips, and can handle boats ranging in size from small canoes to large sailboats and powerboats. Facilities may be located in the same waterfront area or even in the same site (such as a state park with a large lake) and include marinas, launching facilities, piers, and docks that are designed for recreational use.

Accessible Routes
ADAAG requires that at least one accessible route connect accessible buildings, facilities, elements, and spaces on a site. Accessible boat slips, accessible boarding piers at boat launch ramps, and other accessible spaces and elements within a boating facility must also be connected by an accessible route. The accessible route must comply with ADAAG provisions for the location, width (minimum of 36 inches), passing space, head room, surface, slope (maximum of 1:12 or 8.33%), changes in level, doors, egress, and areas of rescue assistance, unless otherwise modified by specific provisions outlined in this guide. 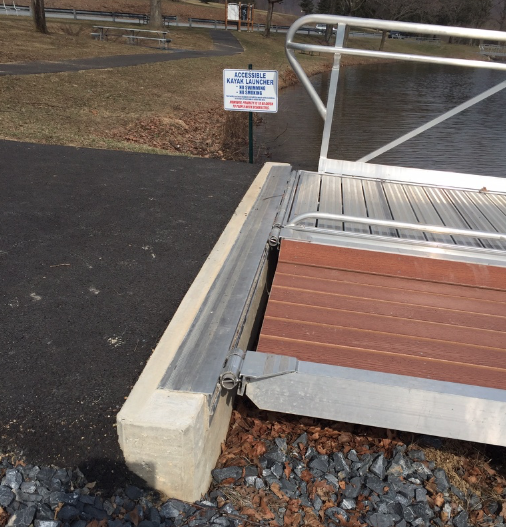 Gangway Slope and Rise Exceptions
Gangways designed for the least possible slope will provide more independent access for persons with disabilities. As a minimum however, gangways must be designed to provide for a maximum 1:12 (8.33%) slope but are not required to be longer than 80 feet in length. For example, if the vertical distance between where the gangway departs the landside connection and the elevation of the pier surface at the lowest water level is 10 feet, the gangway would have to be at least 80 feet long. As water levels rise and fall, gangway slopes also rise and fall. At times, this gangway slope may be less than 1:20 (5%) and at other times it may be more than 1:12 (8.33%). In smaller facilities with less than 25 boat slips, the slope of the gangway may exceed 1:12 (8.33%), if the gangway is at least 30 feet long.

The maximum rise requirements in ADAAG do not apply to gangways. As a result, no intermediate landings on the gangways are required and gangways may be any length.

The gangway slope and rise exceptions do not apply to other sloped walking surfaces that may be part of the accessible route. For example, where a non-gangway sloped walking surface greater than 1:20 (5%) is provided as part of an accessible route connecting accessible spaces of a boating facility, it must comply with ADAAG slope and rise requirements. This would include a ramp connecting a fixed pier or a float with fixed switchback ramps.

Gangway Alterations
Gangways on existing boating facilities may be repaired or replaced without triggering the requirement to increase the gangway length. However, if the areas altered contain primary functions (such as a boat slip or boat dock), existing gangways are considered part of the path of travel to the altered primary function area and must be made accessible, if the cost to do so is not disproportionate. The Department of Justice has determined that it is not disproportionate to spend up to an additional 20 percent of the overall costs of alterations to the primary function areas to make the path of travel accessible.

Handrail Extensions
ADAAG addresses handrail height, diameter, and extensions provided to the end of the gangway. Other specifications regarding vertical supports are not addressed by ADDAG, but may be addressed in local building codes. Handrail extensions are not required where gangways and transition plates connect and both are provided with handrails. ADAAG does not require handrails on sloped surfaces that have a rise of less than 6 inches or a projection less than 72 inches, or a slope of 1:20 (5%) or less. Where handrail extensions are provided, they do not need to be parallel with the ground or floor surface, since the surface may be moving due to water conditions.

Elevators and Platform Lifts
In addition to regular elevators, limited use/limited application elevators (smaller, slower elevators used for low-traffic, low-rise facilities) or platform lifts that comply with ADAAG may be used instead of gangways as part of an accessible route connecting floating piers.

If you are building or renovating a marina, rowing center, or other water access, call BoardSafe to help you design your project and handle the concerns with ADA access issues. Our experience and projects will make it easy. Call 610-899-0286.