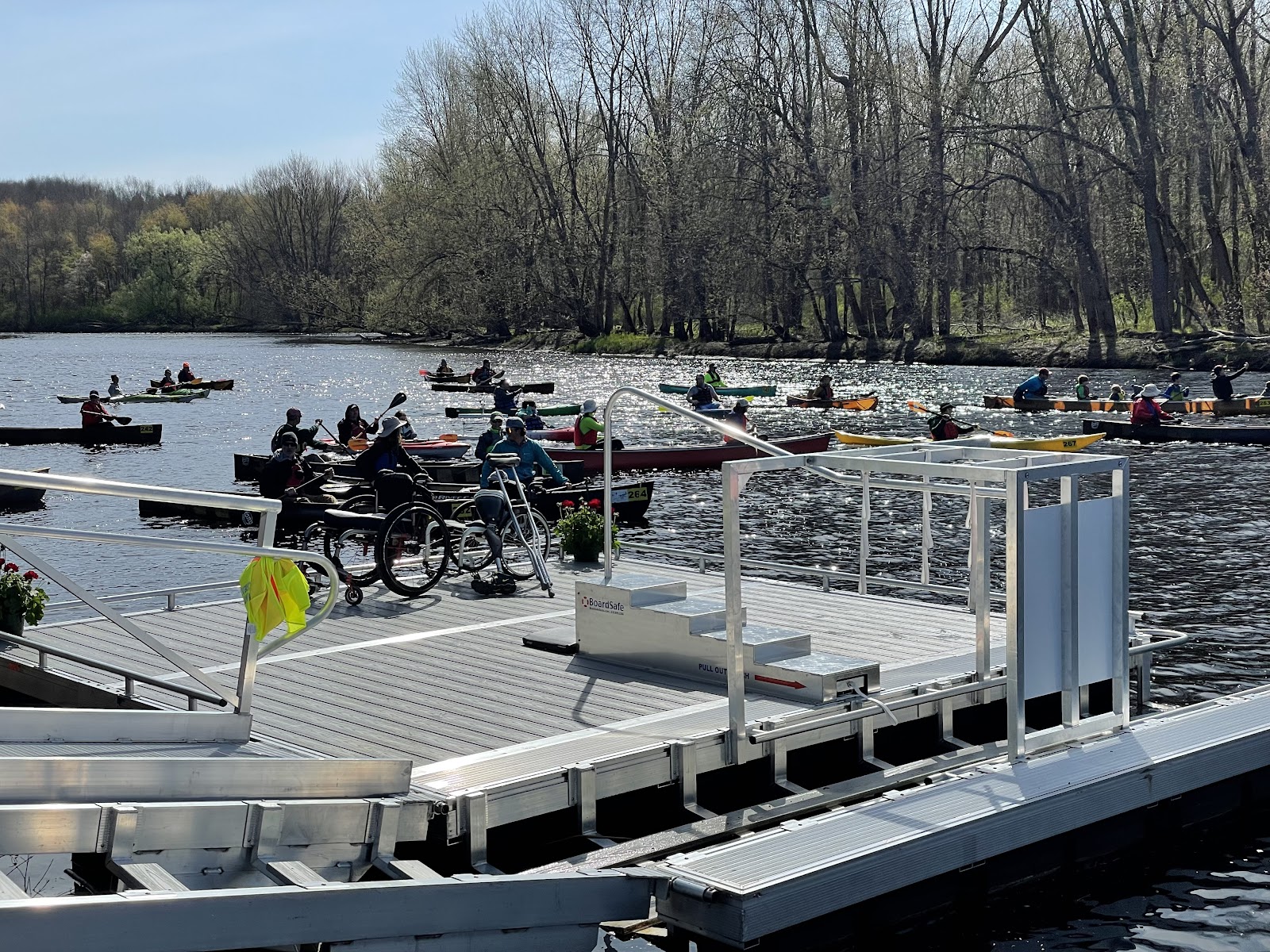 On May 7th, 2022, adaptive paddlers from the Canton, NY, area were invited to try out the new BoardSafe Adaptive Kayak Launch installed at Taylor Park along the Grasse River.

Advocating for the adaptive launch was Mark J. McKenna, who founded the Wounded Warriors Sled Hockey team in the Canton area. Mark knows firsthand the value that accessible recreation offers to adaptive athletes. Mr. McKenna was the push behind the fundraising effort to construct the accessible kayak and canoe launch so it would be ready before the Remington Canoe Race in the spring of 2022. He acknowledged the generous community donors and volunteers who raised the funds to bring the adaptive launch to the Canton area.

"Everyone has trouble getting in and out of a kayak," said Canton Recreation Director Meghan Richardson, sharing that the launch would be available to everybody, but especially helpful to children, aging paddlers, and those with limited flexibility and mobility limitations. Canton Village's mayor and trustees supported the efforts to make kayaking at Taylor Park accessible for all.

Read more about the Canton recreation department’s efforts to install an accessible kayak and canoe launch:

The BoardSafe accessible launch allows for a safer entry into and exit from kayaks, canoes, and SUPs. The launch was designed to improve accessibility not only for those who are disabled but for anyone who needs some assistance getting into and out of their paddling vessels.

The launch installed in Canton includes an adaptive kit, making it accessible for the widest range of users. The launch includes a gangway and side-by-side kayak chute, a roll cage that eases the transition from the wheelchair onto a tiered step-down bench, a slide-out bleacher seat, overhead hand straps and grab bars, side-by-side pull bars, and more.

Each year, Canton is host to the annual Rushton Memorial Canoe Races that draw racers and crowds from all over to paddle the river. The BoardSafe Adaptive Kayak Launch was installed in time to celebrate the 60th annual canoe races that occurred on the famous weekend.

The history of the Canton Canoe Weekend

Each May, the Canton Canoe Club hosts a weekend of paddling that draws as many as 300 paddlers to the Village of Canton for various canoe, kayak, and SUP races.

Canton was home to John Henry Rushton and the famous boatworks company that he founded in 1875 along the banks of the Grasse River. In his honor, this historic event began in 1962 and was originally known as the “Rushton Memorial Canoe Race.”

For the next decade, the race grew in popularity and became an annual event. Today, the event has grown so large that it includes professional, amateur, and recreational races as part of the weekend activities.

While many racers take this event quite seriously, the weekend offers plenty of fun for recreational paddlers. Paddlers of all abilities are invited to join the weekend fun, and the adaptive launch makes accessibility easier for those who benefit from the adaptive features.

Tom Lazore, a Wounded Warrior member from Massena, paddles at the Rushton Canoe races on May 7th at Taylor Park, Canton. He launched his kayak using the new ADA Adaptive Canoe and Kayak Launch, thanks to the fundraising efforts of Canton’s Mark McKenna, founder of the Mountain Warrior Sled Hockey team. NCNow photo

The history of canoes in Canton, NY

J. Henry Rushton (1843-1906) was Canton's World-Famous Boat Builder. He was skilled in wood-crafting, hunting, and fishing, and in 1873, built his first boat. Reportedly, he sold the boat before it was even finished. Then, he started another boat for himself but sold that one, too.

From then on and until his death in 1906, he never stopped building boats and canoes. Rushton had become so famous for his work that, according to Forest and Stream magazine, Rushton's name was a household word wherever canoes were used.

John Rushton started his boat shop in Canton in a small, empty horse barn, and grew it into a large three-story factory.

Rushton took pride in his craftsmanship and the products that made him famous. He was a master craftsman and perfectionist who would build almost any type of canoe for his customers.

There is no record of the number of thousands of Rushton boats the shop produced. It was not in the numbers but in the quality that the Rushton name gained its popularity. Rushton's boat shop was Canton's largest industry for many years and is what put Canton, NY ,on the map.

​Now, the new adaptive boat launch will also put Canton on the map as an inclusive-access destination for adaptive paddlers to enjoy kayaking and canoeing on the Grasse River along with everyone else.

BoardSafe Docks is the premier designer, engineer, and manufacturer of aluminum floating docks, adaptive kayak launches, fishing piers, gangways, pedestrian bridges, and collegiate rowing centers. Their commitment to advocacy and education has helped make BoardSafe the trusted expert in accessibility design, and the manufacturing source for the best-performing and highest-quality launch systems available.

BoardSafe Docks' products ensure the inclusion of all abilities to benefit the widest range of users. To view the BoardSafe adaptive launch system in use, click on this link or copy it to your browser: youtu.be/vUVoc8a7EV8.

To learn more about our projects or to discuss your accessibility vision, please visit our website, BoardSafeDocks.com, or contact us at 610-899-0286.