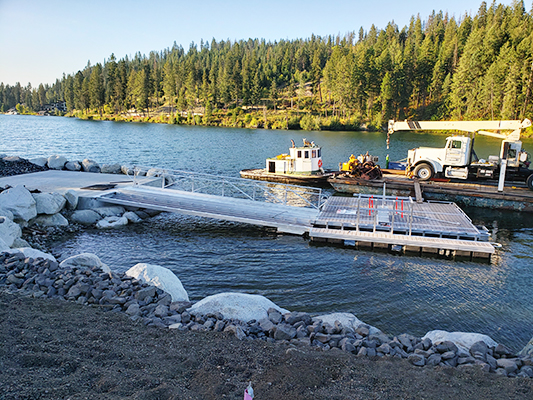 The City of Coeur d’Alene has officially purchased nearly 47 acres of Spokane River waterfront property that was the former Atlas Mill site for the inclusion of a BoardSafe adaptive kayak launch and Clip-A-Launch. The city purchased the property for $7,850,000 and the sale was recorded on May 16, 2018, making the sale official. The city began the process of purchasing the Atlas Waterfront property in May of 2017. The city purchased the property to create permanent public waterfront access and encourage economic development initiatives on the site.

The featured photo is of the BoardSafe Kayak Launch being installed in Coeur D’Alene, Idaho, at Atlas Mill Waterfront Park. This system not only includes our standard launch system, but a Clip-A-Launch as well. This was BoardSafe’s first project in Idaho.

The City of Coeur d’Alene is working in partnership with ignite CDA to assess all opportunities related to uses of this property and to engage the community.  The City Council and ignite CDA board members have directed staff to move forward with creating a new urban renewal district, which is being referred to as the Atlas District, and to expand the River and Lake districts.  A Site Analysis, Financial Feasibility Study, and Master Planning effort is underway to develop an urban renewal plan for the project.  That effort is being led by Welch-Comer Engineers with sub-consultants Heartland and GGLO.  City staff, ignite CDA, and elected officials have been working together to provide feedback on the analysis and to provide ample opportunities for community outreach and public involvement.  Special thanks to CDA2030 and other community volunteers for making the community engagement efforts to date a success.

Here we will provide basic project information, project status updates, and when and how stakeholders and community members can get involved in sharing their thoughts on this important project.